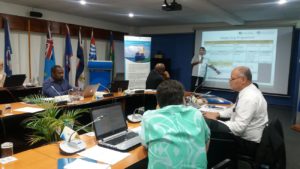 The inaugural meeting was Chaired by Fiji’s Permanent Secretary Infrastructure and Transport, Paul Bayly who stressed the importance or the of the Advisory Group’s work saying. “Fiji Government is proud to be the host country of MTCC-Pacific and chair its Advisory Group given to guide the Pacific region in transition towards low carbon maritime transport and contribute to global efforts to reduce GHG emissions.

The SPC’s Deputy Director General, Dr Audrey Aumua highlighted MTCC-Pacific’s important role as a knowledge sharing and information exchange leader in the region saying, “The SPC committed to operate the centre in a collaborative manner when applying as a host institution in collaboration with SPREP. The Advisory Group is the governance structure established to ensure all partners and SPC members guide the delivery of MTCC-Pacific project. I am happy to see in the meeting’s agenda discussions for a regional strategy on low carbon maritime transport to implement the 2017 Pacific Energy and Transport Ministers’ Communiqué.”

The MTCC-Pacific, a global network project implemented by IMO and funded by the European Union, forms part of the Global MTCC Network (GMN) project on capacity building for climate mitigation in the maritime shipping industry.  MTCC-Pacific has been established as regional centre of excellence promoting and providing assistance to progress towards low carbon maritime transport in the Pacific.

The next meeting of the Advisory Group will be held on 12 December 2017 preceding the MTCC-Pacific Regional Conference and Official Launch.